In the field of popular education practitioners often talk about the idea of “generative themes,” or themes that emerge from a group of learners that give some insight into and/or help in defining the deeper, lived-experience of the students. This year’s Citizen Participation University brought together almost 60 people from 16 different countries to the Civil College in Kunbabony, Hungary for a week of intensive trainings, discussions, and networking. With the help of over twenty workshop leaders, panel presenters, and discussions facilitators, we took on a big and scary subject: the climate crisis. Along the way we surfaced many themes and resonant ideas, but here are a few that stood out.

Our week-long gathering opened with welcoming words from Ilona Vercseg, in which she discussed the early history of her community development work in Hungary in the 1980’s, the work which eventually led her and her husband, Tamas A. Varga, to the rural community of Kunbabony to found the Civil College. Before all that, however, when they were just beginning, she and her colleagues asked themselves “what can we do to help people live meaningful lives?” 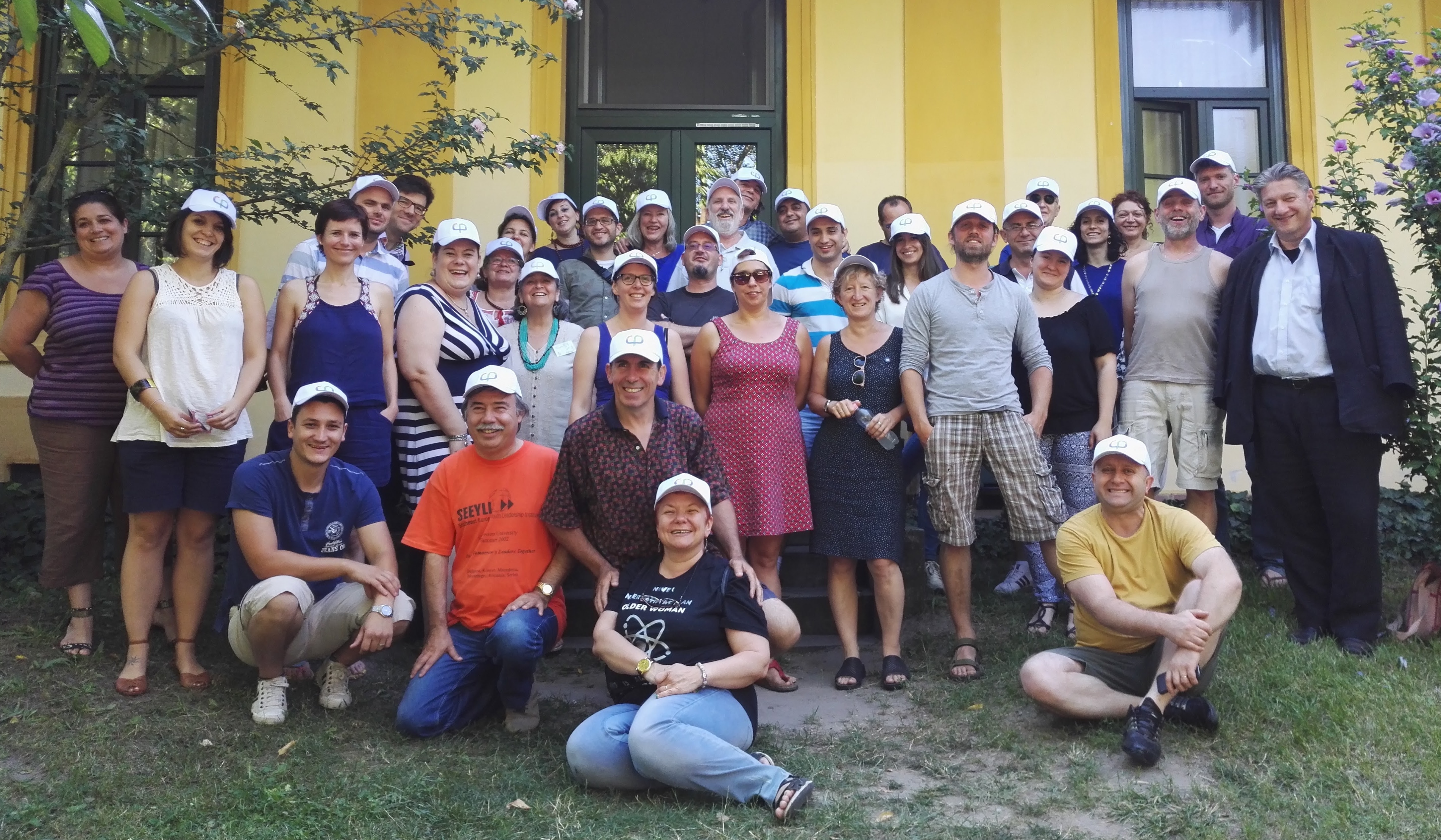 It is a deceptively simple question. But a meaningful life in Hungary—or many countries of Central or Eastern Europe at that time—was not as simple as it sounded. When Ilona and her colleagues set about their work with this goal in mind, none of them could have known the full extent of the stirrings for self-determination that would dramatically alter the continent at the end of the decade. They simply saw a need, and were doing their best to help people exist with dignity, and in community.

Ilona’s early response to the need she saw was also deceptively simple: create a yearbook in which members of the community could share skills they have. Then place those “teachers” next to “students” by listing people who have a skill they want to learn. In our age of internet-fueled instant connections, the powerful—and gently subversive—nature of this action could almost be missed. Forging connections between neighbors that can overcome distrust and alienation using the technology of the day was real, and in its way it took a step to help people live a life a little bit more meaningfully.

We heard a sobering presentation by Dr. Juraj Mesik about the extreme disruption that will be the result of the climate crisis. Many of us had likely seen versions of the graphs showing spikes in CO2 emissions and global temperatures, but Dr. Mesik went further by posing a provocative question: if catastrophic climate change is already “locked in” and the chaos it will cause for the human species already a sure thing (and indeed, already happening in many places) shouldn’t our goal really be to simply “die with dignity?”

"...that is the power of questions (or problem-posing pedagogy as a practitioner of popular education might call it). The fact that we are asking them is already naming something that is real in the lived experience of the people who are doing the asking. And once named, we are able to begin taking action."

Dr. Mesik elaborated, that as a medical doctor, he is trained to diagnose the disease that is there, and to make a treatment decision based on the facts as he observes them. So, if he finds a terminally ill patient, isn’t his duty to prescribe a course of action that is based in reality? Shouldn’t our “death with dignity” be to accept that the climate crisis is beyond our human powers of control, and therefore to take action to build community in the face of potential chaos? Shouldn’t we support one another in a spirit of solidarity, rather than to tear one another down in the hopes that by hording what we have, we may survive the crisis, even if others do not? In short, shouldn’t we face our future—however grim—with a sense of humanity?

On the other hand, we heard from Goran Buldioski who talked of disruption—specifically the disruptive power of community organizing. He began by pointing out that the most effective civil society movement in Hungary today is being led by a right-wing, nationalist movement. Their ability to disrupt should teach us something. While in our work we have done things to increase civic participation over the years, when we get closer to challenging the seats of power our forward progress is stopped. In short, we are conflating participation with power. Given the scale of the challenges at hand, it is a mistake we can no longer afford to make.

Of course, the stated theme of the 2016 CPU was that of “regeneration.” It is a concept derived from the final chapter of Naomi Klein’s book This Changes Everything, in which she juxtaposes her very personal experience of struggling to conceive a child with her research on the impacts of climate change. She recounted a tour of a wetland where the scientist serving as her tour guide pointed out that the micro-organisms native to that environment were failing to reproduce. This was leading to their extinction, and eventually to the collapse of the entire ecosystem.

In that moment it hit her: this is how we go extinct. We will not just drop dead one day, we will simply begin to fail at our basic biological prerogative—reproducing. We will have made our environment too toxic, too hot, too harsh, to provide the security we need to regenerate our species.

It is also a word that carries in it some sense of hope. However, at this year’s CPU people told stories inflected with anxiety about the future of their community-building work as many long-standing organizations and movement builders in our network are facing funding challenges like never before. It begged us to ask, how do we make the world better if we can’t make our payrolls, and can’t ourselves provide for our families? 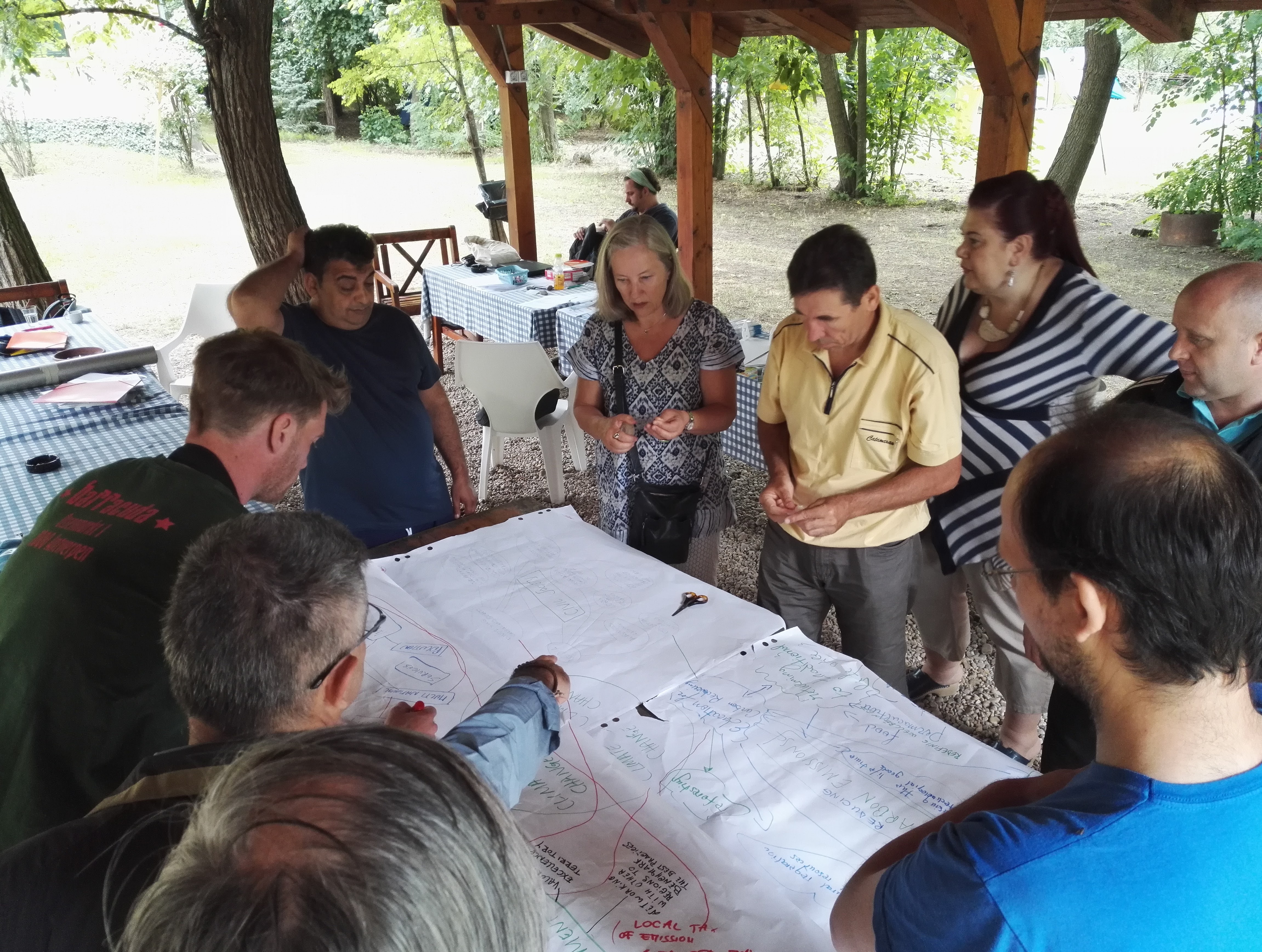 Working in small groups to bring out new ideas and themes.

So where do we find that hope to regenerate? To regenerate our work and our personal passions? To regenerate our organizations and our movements? Over five days in rural Hungary—in the place where Ilona and her late husband once invested so much of their effort to build community and to continue the work of making life a little bit more meaningful, we wrestled with these questions.

We certainly did not answer them all, but that is the power of questions (or problem-posing pedagogy as a practitioner of popular education might call it). The fact that we are asking them is already naming something that is real in the lived experience of the people who are doing the asking. And once named, we are able to begin taking action. This is how community projects and organizing campaigns start. This is how movements begin. And, in the end, it is only by asking the tough and scary questions—and then taking action to find the answers—that we will find meaning in our lives and our communities. |||

A note about the program: the 2016 CPU was held in conjunction with the LADDER project which is an EU funded effort under the Development Education and Awareness Raising (DEAR) program lead by the Association of Local Development Agencies (ALDA). At the CPU we considered the critical importance of citizen participation as we take on the challenges of innovative civic education and awareness raising. Our goal was to make the changes we want to see in our future which will allow us to implement the United Nations Sustainable Development Goals in relation to our planet, our economic models and our democracy. It is a time for regeneration for our local communities, our local economies and the ways we govern.

In her book, This Changes Everything, Canadian author Naomi Klein issues a strong call to action that we can no longer wait to address the climate crisis. She argues that the economic models of the 20th century—both Capitalism and Communism—with their dependence on fossil fuel extraction, waged war on the earth and the climate.

Only a grassroots movement calling for a fundamental re-thinking of our economy AND our democracies can help us make the changes we need to survive. Inspired by Klein’s call—and the numerous examples of alternatives bubbling up everywhere—this year’s CPU discussed and took action to regenerate our local communities, our local economies, and our planet.

The first ever CPU Film Festival

In 2016 we inaugurated what turned out to be a very popular addition to the CPU programing: our “film festival.” We watched several films, including This Changes Everything, the film about Naomi Klein’s book of the same name, and the film Disobedience created by the organization 350.org.  We also took in a TED talk on the subject and more!